Surfers of the Zuvuya was written in the 80’s and explains who the mysterious Maya really were.  This short book is by José Argüelles, (the artist/philosopher who inspired our film) and is about his higher self, his “dimensional double,” Uncle Joe Zuvuya. They journey from the center of the earth to the outermost reaches of the galaxy. Uncle Joe instructs Argüelles in Mayan etheric engineering, Arcturian space stations, Atlantean family histories, and much more.

Surfers of the Zuvuya is educational “science faction”.  Movies likes Black Panther accomplish this on several levels by embedding ancient technology and culture into an epic story. Surfers of the Zuvuya makes galactic history fun.  For folks who are scared of ET contact or the greater reality in the universe, the style and tone of this book is very palatable. As I’m reading this book, I’m getting this message; maintain this kind of tone in your movies.  If we maintain this kid of sense of humor perhaps people won’t label the films as “new age” (it’s actually ancient knowledge) or too experimental.

Jose also wrote this book after Harmonic Convergence, the first synchronized global peace meditation. His son had also recently been killed in a car accident. For a  human being to write something so playful after going through the highest highs and lowest lows is an incredible accomplishment.

And for everyone involved in this movement, there really seems to be little time for jokes because it simply isn’t funny – the dire need for the human race to deprogram in order to evolve.  Laughter is the best medicine (at least for the human race) and being playful can help face our dark sides. Perhaps that why the dark comedy genre has become more popular over the years.

In regards to my art (music and film) – this has always been my greatest challenge. For this second film,  can we expand on an unusual format by adding humor so we can reach a much larger audience? One of our goals for this film is to document the other side of the story. For example, we have been in search of a well-spoken funnyish Atheist to put in the movie. Can Atheists be funny? Well, if you happen to know one, please send them our way!   And in regards to my first screenplay which I’ve been working on for 4 years now – if you were to read it you might describe it as a dark-comedy-esoteric-love -science faction.

So check out this book! It’s one wild ride!  And on a more serious note, continue on the journey below…

No one can grasp the changes that are coming so quickly to our lives and Planet.

All that the higher galactic intelligences have wished for humanity to learn on a planetary scale is this: the only way to break the cycle of fear and destruction to which you have made yourselves hostage is by creating a complete planetary field of trust.

Thirty-one years ago on August 16-17, 1987 (Kin 55-56), Jose Arguelles spearheaded the Harmonic Convergence, the first synchronized global peace meditation with the purpose of synergizing the Highest Collective Intention of Humanity.

He envisioned that the synchronized intention of a human collective would create a signal more powerful than the atomic signal at Los Alamos in 1945.

This date was also the conclusion of a 1144 year Ancient Mayan prophecy of the 13 heavens and 9 hells. Arguelles put out a call for 144,000 people to meditate simultaneously at sacred sites around the world to establish a planetary receptacle to activate a new harmonic grid.

The testing and release of atomic radiation into the atmosphere of Earth on July 16, 1945, Kin 34, set up a signal which drew the immediate attention of the higher galactic intelligences.

He foresaw that with enough humans synchronized with peaceful intentions, the benevolent galactic intelligences could then stream communication through high frequency beams to catalyze the mental field of the planet and set up a new harmonic grid.

This would  activate a new planetary field of trust and initate the passage from competitive conflict to a time of collaborative cooperation. He envisioned this moment to be the first step toward transitioning civilization from a military state of terrror to a “de-industrialized, decentralized, post-military planetary society.”

In this vision all governmental and political structures would be replaced by vast numbers of bioregional local cells. He layed out plans for the dismantling of nuclear plants and all related armaments industries and technologies as well as the deployment of new technologies and worker reeducation programs.

He envisioned that by 2013, galactic synchronization, humanity would have evolved into beings possessing a brilliantly simple yet sophisticated technology based on the matching of solar and psychic frequencies.

At this stage, the planetary grid would be operating on non-polluting technology, and with the “majority of humans living comfortably in small bioregional groups, strung together as information nodes on a communications system finally free of wires.”

He envisioned the transformation of technology, through the recognition that our own bodies (activated to their full bio-electromagnetic capacity) are the best and most sophisticated technology there is.  He put forth that the Human Body, once awakened and properly activated, is the path beyond technology and the meaning of the Galactic Mayan return. 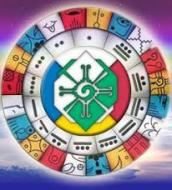 All of his subsequent work had as its purpose the harmonic realignment of human, planet and cosmos, as well as practices and codes to turn on our forgotten technology via Galactic Mayan Time Science with its simplest daily application of the 13 Moon calendar.

“The meaning of the return of humanity as a planetary being bound by one common timing standard, the natural universal frequency of synchronization, is that the human mind and spirit will again become attuned to a perception of harmony and oneness with Nature.” –Jose Arguelles/Valum Votan

Thirty one years later and the world is vastly different than this vision. Technology has been weaponized through cyber warfare. Transhumanism and the hybrid age is rapidly advancing in the technological war against humanity. Even language is weaponized these days.

There is a vast gulf between our civilization and the recognition of earth as a total living system.

The collective did not enter the harmonic timeline. Yet there are still groups and inviduals evolving in the new frequency and strengthening the harmonic grid. We send infinite gratitude to these beings from every tradition, for it is their light that allows others to see in the dark.

We are now in a final battle of the war of souls. Everything appears inside out and upside down.  A Great Uncertainty pervades. No one is exempt from the fluctuating waves now bombarding our Planet.

Misunderstandings and aggression are rife. People are suspicious of each other. Depression and substance abuse is skyrocketing. Suicides are on the rise.

We are living in not just a polarized world but a multi-polarized world. Multiple forces, both on and off planet, compete simultaneously to influence the human mind. Some seek to enslave and dominate, while others seek to empower and liberate.

The primary mode of enslavement is through division and distraction. With so much information at our fingertips, people are losing their ability to introspect.

Our job is to stay awake, keep and open heart and not  become hypnotized. Those with the most illusions and attachments suffer the most. Much compassion is required. Stay open to update your perception as new knowledge is revealed.

All the veils are now being opened. Many cannot handle it and so split off into “comfortable” realms of the Unreality of their choosing. Every day, it seems, there are more versions of reality to choose from as the fragmentation is now quantum.

But there is only one Path that gives Life. That Path is the Reconnection to Primal Source by whatever name you call it.

We can experience this reconnection by focalizing our mind into its Unoriginated Condition, while at the same time maintaining Omnipresent Consciousness, i.e. “Be still and know I am GOD.”

Once we reach this Center point we can feel the New Living Cycle that exists on its parallel track of which many are attuned to.  But this Cycle, or new paradigm, cannot come into full Regenerative Focus until we, as a collective move out of the Past vibratory entanglements into the Present fractal-free waveform.

This requires an ever deepening purification of mind and heart, with the willingness to let go of preconceptions and face the possibility that Reality may not be anything like what we thought. The Harmonic Convergence is still happening and will continue to happen until everything is brought back to at-one-ment.

Those who are truly attuned to the Harmonic Convergence cannot be so if they are in judgement even against the fundamentalists. The point is the expression of universal compassion, forgiveness, and unconditional love for all of life. Those who are without sin shall cast the first stone. Sin may be understood to mean, that which interferes with another’s free will. Harmonic Convergence is the exercise of the common free will on behalf of all.–Jose Arguelles/Valum Votan

Art always uplifts in times of darkness. Beautiful murals by @chrissoria #timeisart #artislife
We don’t need to be saved. Not by an experimental Pharmaceutical drug especially! We are responsible for doing the inner work. Save yourself. #nomandates #sovereign #standtogether it’s our only way out of this mess.
We will not be divided! We do not support segregation or discrimination of any kind. #lovewins #nomandates
And here we are at a crossroads.🌱 #carljung #lovewins #standtogether #psyop